Item. In the same of our crucified lord Jesus Christ. Amen. Year as above, 11th Kalends of April. We, brothers of the Order of Preachers Bernard de Caux and Johan de Saint-Pierre, inquisitors of heretical depravity appointed by apostolic authority in the city and diocese of Toulouse;

Asfrom La Pomerède from Dreuilhe R. de Turre; Peirona, mother of Raimund Barot, and Bernarda, wife of the same Raimund Barot, of la Pomerède; Raimund Oto and Peirona, his wife; * of Dreuihle, diocese of Toulouse; defamed and suspected of heresy,*Guilhem Johan; Bernard Crast; Bernarda, his wife; Pons and Peire Vinad, brothers; Peire de Solar and Raimunda, his wife they saw and adored heretics within the last few years as has been established before us by sufficient witnesses; and all of the aforenamed, summoned, have not appeared, nor defended themselves before us, on this very day to hear the definitive sentence regarding the crime of heresy and other rites besides, we, having discussed with many prelates and received council from other good men, condemn by definitive sentence, they, who have been legitimately cited but are contumaciously absent, as heretics, and we order their property seized; 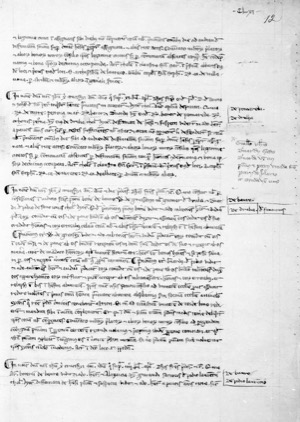