In the name of our crucified lord Jesus Christ. Amen. Year as above, Ides of March. We, brothers as stated above, et cetera.

That the aforenamed Beranrd de Gourvieille saw heretics and adored them many times, served them, sent them provisions, listed to their preaching, believed their errors, and relapsed in the abjured heresy;

As well the aforenamed W. de Vilar saw heretics in many places and adored them, listened to their preaching, believed heretics to be good men and to have good faith, and denied the truth in contravention of his own oath;

Item. As well the aforenamed Durand Daury lived with heretics for a year and adored them many times, ate with them, listened to their preaching, accompanied them, believed the heretics to be good men, to have good faith, and that one could be saved by them, and himself officially cited to appear in order to receive penance regarding the above but on the assigned day itself has not appeared before us;

As well that Raimund de Syolh and Arnald Guerrier of Toulouse, consigned to prison as penance for heresy, but, neglecting their own sworn oath, left prison without permission of the Church and at the cost of their souls, and though legally cited and waited upon longer161 than expected, they have not appeared before us on this, the assigned day;

All of the aforenamed, to have appeared for their definitive sentencing regarding the crime of heresy, and other rites besides, we, having discussed with many prelates and received council from other good men, condemn them, they who have been legitimately cited but are contumaciously absent, as heretics, and we order their property seized;

Enacted at Toulouse in the cloisters of Saint-Sernin in the presence of the abbot of the same place; Esteve, archpresbyter of Laurac; Amielh, chaplain of Saint-Etienne; R., chaplain of Villeneuve; Peire Aribert; and many others at a general sermon. 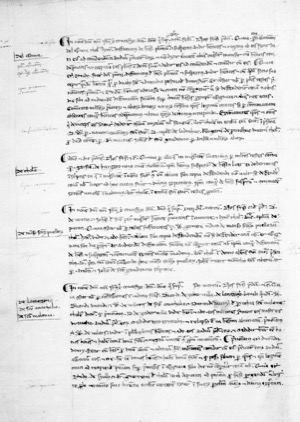