Item. Year as above, 14 Kalends of February.

Alaman de Roaisfrom Toulouse, condemned for heresy, saw and adored male and female heretics on many occasions and in many locations, had and received them many times, ate with them and had bread blessed by them many times, attended many apparelhamen and the heretication of many people, lead and accompanied them many times, gave them and received from the gifts many times, accepted the peace from them often, listened to them preach errors of the material world - that God did not create it, that there is no salvation in baptism and marriage, that the bodies of the dead will not be resurrected, that there are two gods - one good and the other evil, he believed as well in salvation by them, and that he had believed in them for 30 years and left behind this belief the Thursday after the last Feast of Saint Hilary; he recognized as well that everything charged against him regarding heretical depravity by our beloved memorialized brother Esteve of the minor order and the late brother Guilhem Arnald of the order of preachers, inquisitors of heretical depravity, was true, except certain things that were done to breach the peace but about which he was sure they were after the peace; moreover, he was under the sentence of condemnation for heresy for 10 years or more;

Following the council of many other good men, we enjoin on him, under the power of his sworn oath, that from today he is incarcerated in his home next to Saint-Etienne, the same to be served in perpetuity in penance for the aforesaid. We enjoin on him that he provides Pons, who stayed at some point with Raimund the scriptor, with 15 solidis of Toulouse per year for food and clothing for as long as he lives. Item. He shall compensate the Hospitalliers of Saint John for the pillage they suffered and all others on whom he inflicted losses and injury. 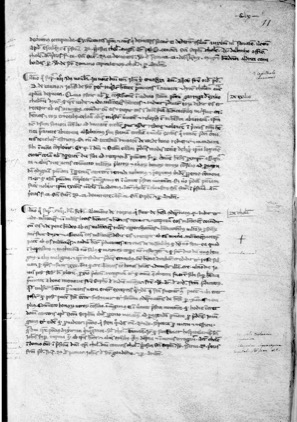