Item. In the name of our crucified Lord Jesus Christ. Amen. Year as above, 2nd Nones of November. We, the above-mentioned brothersfrom Saint-Germier;

As it has been established before us through the judicial confessions of Bertrand de Alamans of Saint-Germier, in the diocese of Toulouse, that this Bertrand, many times defamed by heresy, saw heretics on many occasions and in many places, listened to their preaching, adored them, freed three captive heretics, lead them, and was a believer of the heretics for many years such that if he dies in their sect he sould be saved, and firmly summoned many times on many days, nevertheless the same heresy has been established before us by many other witnesses, has not presented himself before us on the assigned day to hear the defeintive sentnce regarding the crime of heresy, and other rites, in discussion with many prelates and the counsel of many good men, we condemn the aforenamed Bertrand, legally summoned but contumaciously absent, as heretic in a definitive sentence, CLXwe order his goods be seized, and excommunicated him and any others who hereonin knowingly give him counsel, help, or favour. 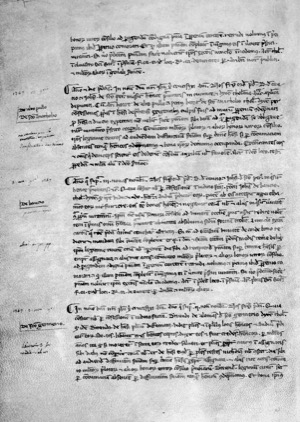