Item. In the name of our crucified Lord Jesus Christ. Amen. Year as above, 8th Kalends of November. We, brothers of the Order of Preachers Bernard de Caux and Johan de Saint-Pierre, inquisitors of heretical depravity appointed by apostolic authority in the city and diocese of Toulouse;

Asfrom Hautpoul from Montjoi from Saint-Agnan from Lanta from Toulouse it has been established before us through the judicial confession of Ysarn Bonshom of Hautpoul; Peire Grimaud and Hugo de Montanhol of Saint-Angan; Arnald Ermengaud of Lanta, in the diocese of Toulouse; and Juliana, wife of the late Johan Testoris, of Toulouse;

That the aforenamed Ysarn Bonshom saw heretics on many occasions and in many locations, listened to their preaching, adored them, ate with them at the same table, honoured them, believed them to be good men, and denied the truth before us and other inquisitors in contravention of his own oath;

Item. As well the aforenamed Peire Grimaud saw and adored heretics, lead them, listened to their preaching, welcomed heretics in his home for 8 days, and denied the truth before us in contravention of his own oath;

Item. As well the aforenamed Hugo de Montanhol saw and adored heretics, received them in his home, believed them and their errors, and relapsed into the heresy abjured;

Item. As well the aforenamed Arnald Ermengarde saw and adored heretics on many occasions, listened to their preaching, ate bread blessed by them, attended their apparelhamento many times, believed them to be good men, welcomed heretics for 15 days in his home, and denied the truth before us in contravention of his own oath;

Item. As well the aforenamed Juliana saw and adored heretics on many occasions, received them in her home, believed them to be good men, and denied the truth before us in contravention of her own oath;

Enacted at Toulouse in the cloisters of Saint-Sernin in the presence of Fortz, chaplain of the same place; Raimund, chaplain of Sainte-Marie-la-Duarade; Peire Aribert, public notary; and many others in general sermon. 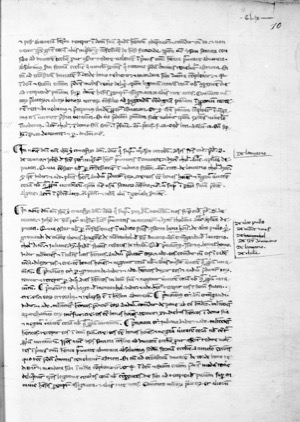