Item. In the name of our crucified Lord Jesus Christ. Amen. Year as above, 3rd Kalends of October. We, brothers of the Order of Preachers Bernard de Caux and Johan de Saint-Pierre, inquisitors of heretical depravity appointed by apostolic authority in the city and diocese of Toulouse:

As from Montcabrier from Laurac it has been established before us through the judicial confessions of Ysarn Mercader of Montcabrier and W. Sedasser of Laurac, in the diocese of Toulouse;

That the aforenamed Ysarn saw and adored heretics on many occasions, listened to their preaching, lead them, brought them food many times, believed heretics and their errors;

Item. As well the aforenamed W. Sedasser, after he abjured heresy before other inquisitors, saw and adored many heretics, and believed heretics and their errors;

By reason of the fact of their own sworn oath to render themselves in person for sentencing, and legally summoned to receive penance regarding the foregoing, yet on the assigned day itself they did not appear before us, after many summons, to hear the definitive sentence but instead were contumaciously absent, we, after discussion with many prelates and the counsel of other good men, by definitive sentence, condemn them as heretics, order their goods be seized, and excommunicate them and anyone who knowingly hereafter give them counsel, help, or favour. 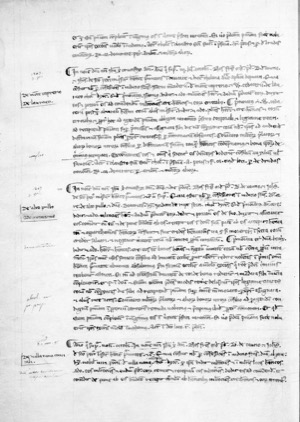