Item. In the name of our crucified Lord Jesus Christ. Amen. Year as above, Kalends of September. We, brothers of the Order of Preachers Bernard de Caux and Johan de Saint-Pierre, inquisitors of heretical depravity appointed by apostolic authority in the city and diocese of Toulouse:

As from Toulouse from Cumiés it has been established before us through the judicial confessions of W. Donat of Toulouse and Raimunda, his wife, and Gauzi de Cumiés, in the diocese of Toulouse;

That the aforenamed W. Donat saw and adored heretics on multiple occasions, believed them and their errors, denied the truth before us, and relapsed into the heresy abjured;

As well the aforenamed Raimunda saw and received heretics in her home, adored them on multiple occasions, gave them food, ate with them at the same table bread blessed by them, believed heretics to be good men, and denied the truth before us in contravention of her own oath;

As well Gauzi saw, received and adored heretics on multiple occasions, listened to their preaching, gave them of hers, ate bread blessed by them, attended heretication, believed heretics and their errors, and after she abjured heresy before other inquisitors, she saw and hd heretics in her home;

They now, following wiser council, wish to return to the unity of the Church as they claim, first having abjured heretical depravity; we therefore release them - following the ways of the Church - of the chains of excommunication by which they were bound due to the aforesaid crimes, so long as they have returned to ecclesiastical unity in good faith and having fulfilled the commands enjoined upon them. 158As they rashly transgressed God and the Holy Church in the aforementioned ways, they appear before us today as compelled, legally cited, to receive their penance regarding the crime of heresy: definitively assigned, after discussion with many prelates and the council of many other good men to find an appropriate punishment, we order and desire that they be put in prison indefinitely, and we enjoin on them this penance bound by their respective oaths. If, indeed, they refuse to accomplish the aforesaid penance, we again bind them by the chains of excommunication. 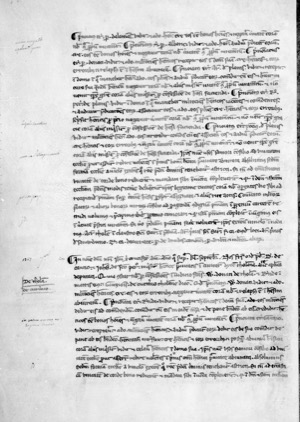