Item. In the name of our crucified Lord Jesus Christ. Amen. Year as above, Ides of July. We, brothers of the Order of Preachers Bernard de Caux and Johan de Saint-Pierre, inquisitors of heretical depravity appointed by apostolic authority in the city and diocese of Toulouse:

Asfrom les Cassés from Toulouse it has been established before us through the judicial confessions of Bernard de Rochavila, militis, domini of les Cassés, diocese of Toulouse; W. Marchand and Cortesia, his sister, of the city of Toulouse;

That the afornamed Bernard de Rochavila saw and adored heretics on many occasions, accompanied them, gave them [of his] and received gifts from them, ate with them, listened to their preaching, believed them to be good men, welcomed them into his home, denied the truth to other quisitors during the grace period, and refused to do the penances imposed by us for the aforesaid;

Item. As well the aforenamed W. Marchand saw and adored heretics on many occasions, ate with them, served them, lead heretics to hereticate certain others, attended heretications, and relapsed into the heresy abjured;

Item. As well the aforenamed Cortezia, sister of W. Mercier, saw and adored heretics on many occasions, received them, believed them to be good men, gave them of hers, and relapsed into the heresy abjured;

As they are not willing to appear, as obliged by their sworn oath, in person regarding penances, for judgement and sentence by the Church, and other rites besides, this very day regarding the crimes herein recounted, to hear the sentence regarding the for the crime of heresy, definitively handed down, after discussion with many prelates and the council of many other good men; those legally cited, but contumaciously absent, by definitive sentence we condemn them as heretics, order their goods seized, and excommunicate them and all who knowingly hereafter give them counsel, help or favour. 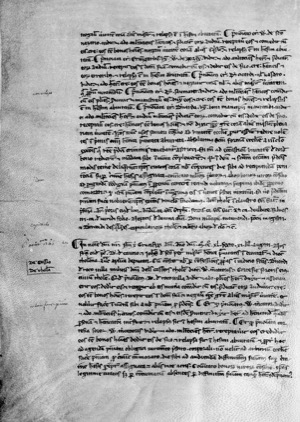