Item. In the name of our crucified Lord Jesus Christ. Amen. Year of the Lord 1246, 8th Kalends of July. We, brothers of the Order of Preachers Bernard de Caux and Johan de Saint-Pierre, inquisitors of heretical depravity appointed by apostolic authority in the city and diocese of Toulouse:

Asfrom Toulouse from Saune it has been established before us through the judicial confessions of Arnald den Johan junior and Jacob den Johan, his brother, of Toulouse; Sybile of Soane, diocese Toulouse;

That the aforenamed Arnald den Johan saw and adored heretics, gave them of his, and ate with them within the last few years;

Item. The aforenamed Jacob den Johan saw and adored heretics on many occasions and in many places, and ate with them, within the last few years;

Item. The aforenamed Sybile, wife of the late Arnald Guilhem, of Saune, after she abjured heresy and swore to persecute heretics, saw and adored heretics and ate with them; 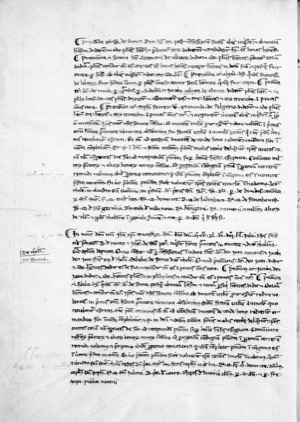