Item. In the name of our crucified Lord Jesus Christ. Amen. Year of the Lord 1246, 5th Kalends of June. We, brothers of the Order of Preachers Bernard de Caux and Johan de Saint-Pierre, inquisitors of heretical depravity appointed by apostolic authority in the city and diocese of Toulouse:

Item. That the aforenamed Estolt de Rochavila saw and adored heretics on many occasions, gave them and received from them gifts, lead and received them in his home, attended heretications, believed theheretics and their errors, and after making confession to other inquisitors and abjuring heresy, he saw heretics and spoken with them, and did not take them into custody as he had sworn to do;

Item. As well the aforenamed Tres Eminas saw and adored heretics on many occasions, believed them to be good men, ate with them, accepted peace from them, attended heretications, denied the truth before inquisitors in contravention of his own oath, and after abjuring heresy knowingly saw a conemned heretic and ate with him;

Item. As well the aforenamed Bernard de Rochavilla saw and adored heretics on many occasions, lead and accompanied them, gave them and received from them gifts, ate with them,listened to their preaching, believed them to be good men, received them in his home, and during the grace period denied the truth to inquisitors;

Item. As well the aforenamed Pons Saquit saw and adored heretics on many occasions, lead and received them many times, attended heretications and appareilamens, believed heretics and their errors, was treated by them, and after abjuring heresy before other inquisitors he saw two heretics in his own home, hid them, a few years before and did not take them into custody as he had maintained to do by his own oath;

Item. As well the aforenamed Peire Babau saw and adored heretics, listened to their preaching, made agreement to not reveal heresy, knowingly denied the truth before us and hid it from other inquisitors in contravention of his own oath;

Item. As well the aforenamed W. Maurini saw and adored heretics, denied the truth before us and hid it from other inquisitors in contravention of his own oath;

Item. As well the aforenamed P.Bernard and Bernard Fornier saw and adored heretics, made agreements to not reveal heresy, knowingly denied the truth before us and hid it from other inquisitors in contravention of his own oath; 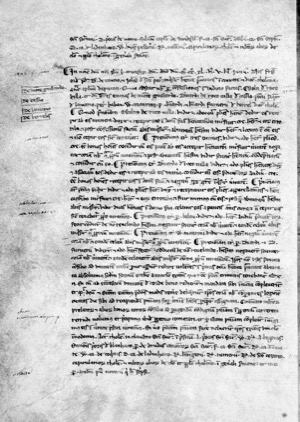