from Toulouse In the name of our Lord Jesus Christ. Amen. Year of the Lord 1246, 15 kalends of April. We, brothers of the Orders of Preachers Bernard de Caux and Johan de Saint-Pierre, inquisitors of heretical depravity appointed by apostolic authority in the city and diocese of Toulouse:

As Peire de Roais and Pons de Gamevila, citizens of Toulouse, defamed many times by their own confessions made at court, and so manifestly caught in heresy, and because of this they are bound by the aforesaid oath to do corporal penance, yet are not willing to do the penance as decided by the Church for the aforementioned crimes - it is remembered as well that Peire de Roax, after accepting penitence from inquisitors for the crime of heresy, relapsed into the heresy he abjured - those lawfully summoned yet defiantly absent, to hear for themselves on the day which had been previously assigned, the definitive judgement about the crime of heresy as well as other judgements solemnly made, with the counsel of honourable men, the definitive sentence as condemned heretics: their goods are ordered be seized, and we excommunicate them and anyone who knowingly hereafter gives them counsel, help or support. 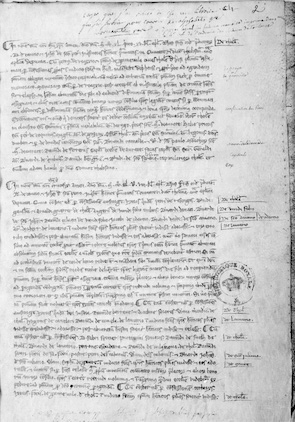