Item. He saw at Saint-Martin-Lalande, in the house of Ysarn de Gibel, someone to whom the witness brought either bread or wine at the instruction of his father, however he did not see any other men with the aforesaid heretics nor did he adore them. This was about 9 years ago.

Item. He saw at Saint-Martin-Lalande, in the house of Guilhem Fabri, the Roger sisters, heretics, to whom the witness brought wine at the instruction of his father. He saw there with them said Guilhem Faure. The witness did not adore the aforesaid heretics there that he recalled, nor did he see adoring. This was about 8 years ago.

He believed the above-mentioned heretics to be good men, truthful, friends of God, to have good faith, and that one could be saved by them, even though he knew that the Church persecuted them. He heard the heretics preach that God did not make visible things, that there is no salvation in baptism or matrimony, that the holy host is not the body of Christ, and that dead bodies do not rise. However the witness did not believe the aforesaid errors. He first believed them to be good men 14 years ago, and kept to that belief until making his confession to brother Ferrier, which he believed to be the truth. Afterwards he did not see heretics. He recognized that he did wicked things when in court before brother Guilhem Arnald and his associate, erstwhile inquisitors, sworn in and asked, he denied that he had seen or adored heretics or done anything or spoken with them.

Item. He recognized that he did wicked things as after he had abjured heresy and swore to persecute heretics, he saw and and adored heretics, listened to their preaching, led and accompanied them, believed them to be good men, and ate with them the bread they blessed. This was given at Toulouse before brothers Bernard and Johan, inquisitors. He abjured heresy and swore, etc., and committed himself and his to follow the instructions of inquisitors, and accepted this to be a public document. Witnesses: Arnald, prior of Saint-Sernin; P. Fort, chaplain of Saint-Sernin; Amelh, chaplain of Saint-Etienne; and Peire Aribert, public notary, who wrote this. 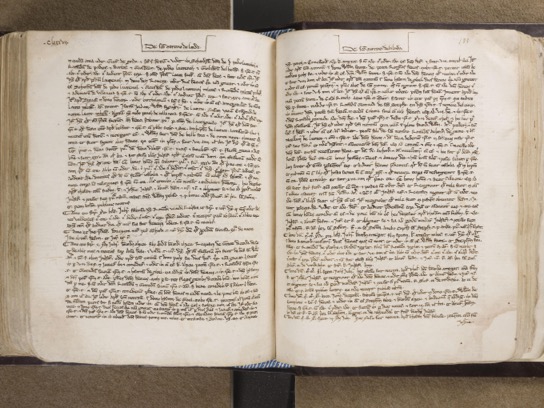