Mas-Saintes-Puelles Item. He saw at Mas-Saintes-Puelles in the house of Bernard Cap-de-Porc Johan Mercer and Peire Bolvena, heretics, and up to 8 other male and female heretics. He saw there with them Bernard del Mas, Find the first part of this confession in 37th folio Jordan del Mas, and Galhard del Mas, brothers, and Raimund de Quiders, brother of the witness, and Peire Amelh and Guallard Amelh, brothers, and Raimund Amelh, Peire Gauta senior, Arnald Donat, Esteve de Rosengue, Arnald de Rosengue and Bernarda, his wife, and Guilhem de Rosengue and Pons de Rosengue, sons of said Arnald de Rosengue, and Companh, Bernard Aichart, Raimund Aleman junior and Ermengarde Alaman, his mother, and Riqua, Pons Gran, Guilhem Vidal and Bernard Cap-de-Porc, brothers, who sometime after were heretics, and many others whom he did not recall. The witness and everyone adored the aforesaid heretics and listened to their preaching, and were present at the heretics' apparelhamento and accepted the peace from them. This was 12 years ago or more.

He believed the aforementioned heretics to be good men, true, friends of God, to have good faith, and that one could be saved by them, even though he knew that the Church persecuted them. He heard from the heretics that there is no salvation in matrimony, and that the great sin done with one's own wife are done with all women, and that dead bodies do not rise. The witness believed what the heretics said, but he did not hear them speak of other errors. He believed the heretics to be good men for years he cannot count and kept that belief until the time he made his confession to Brother Ferrier, OP at Limoux. He abjured heresy and swore before brother Bernard de Caux, inquisitor. Witnesses: Arnald, prior of Saint-Sernin; P. Cristofor, monk of Saint-Thibéry; Arnald Raines, chaplain of Pechaudier; and Peire Aribert. 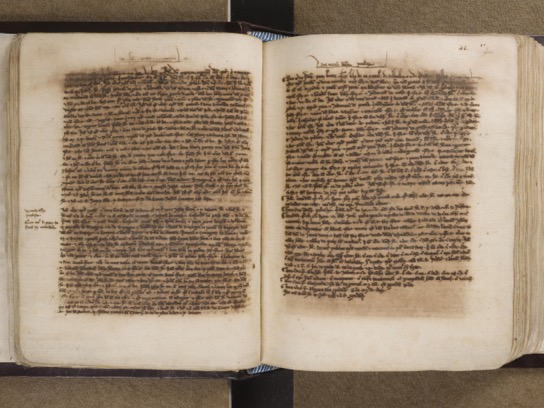