Item. Year as above, 13th Kalends of January. The sworn witness Ermengarde de Gozens, wife of Guilhem de Gozens, said that she saw two heretics whose names she did not know at Puylaurens in the home of some men whose name she did not recall. She saw there Jordan de Saissac and Sybelia, his wife, and Prader, knight of Puylaurens, and the lord of the house in which were the heretics, whose names she did not know, along with the family of the house. Everyone and the witness listened to the aforesaid heretics' preaching, but she did not adore the aforesaid heretics nor saw anyone adore. This was about 10 year ago.

Item. She said that she saw in her own house two heretics she did not know and who were brought there by Ysarn de Gibel while the witness was away and without her knowledge. So she asked these men how they dared to enter the home of the witness while she was absent, and they responded that Ysarn de Gibel brought them there. The witness told them to leave the house, by they did not want to. She saw with the aforesaid heretics Raimund Joglar, Arnald Ysarn, who came there with the witness, and Peire Amielh, and Raimund Martin, nephew of said Peire, who lived at Castelnaudary and who left with the aforesaid heretics. The witness did not adore nor saw adoring. This was about 3 years ago.

Item. She saw at Saint-Martin-Lalande in the home of Ysarn de Gibel Adam and his companion Peire Arnald, heretics. She saw there with the aforementioned heretics the aforesaid Ysarn de Gibel and Andrea, wife of said Ysarn. The witness and the aforesaid Ysarn and Andrea, his wife, ate with the said heretics at their table, and they adored them bending at the knee three times, saying, "Bless us good men, pray to God for us." This was about 12 years ago.

Item. She said that she saw in the house of Ysarn de Gibel Raimund Jaules and his companion, heretics, many times. She saw there said Ysar and Andrea, his wife, and Peire Amielh, and Raimund Martin, nephew of said Peire Amielh. That time the witness and the aforesaid Andrea and Andrea, wife of said Ysarn, ate with the aforesaid heretics at their table. She adored them but she did not see the others adore. This was about 5 years ago.She said as well that many people sent the aforesaid heretics bread and wine and fish and this was the same period.

She believed the above-mentioned heretics to be good men, friends of God, true, and that one could be saved by them, even though she knew that the Church persecuted them. She heard them say errors of visible things, that God did not make them, and that as man sinned with wife, so with everything, and she believed what they said. She first believed the heretics to be good men about 13 years ago, and stopped believing them 3 years ago. This was not confessed to other inquisitors. She did not see heretics thereafter, nor believed, nor adored, nor gave or sent [them] anything, nor listened to their preaching. She recognized that she did a wicked thing as she forgot the agreement made at Castlenaudary before brothers Guilhem Arnald and Esteve, inquisitors, she hid the abovesaid truths, and after she abjured heresy and swore, etc. to persecute heretics, she believed the heretics to be good men and she saw them in her house.

Item. She said that she has never seen her husband with heretics. She abjured heresy and swore, etc. Witnesses: Nepos, cleric; Peire Fresapa; and brother Bernard de Caux, inquisitor, who received this confession. 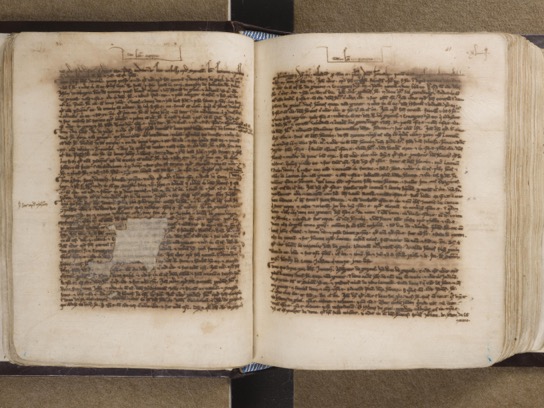