Year as above, 7th Kalends of December. The sworn witness Bernard Folc said that he saw heretics standing in public at Saint-Martin-Lalande, but he did not adore them. This was 35 years ago.

Item. He said that when the heretics were held prisoner at Saint-Papoul, Ysarn de Gibel lead the witness to Saint-Papoul at night with weapons, with Arnald Valh, Guilhem Arnald, Esteve Faure, Peire Galhart, Peire Faure de Collo, Raimund Folquet, Peire de Comas, and Raimund de Verazilh. However, the witness did not know for what purpose the aforesaid Ysarn de Gibel brought the witness there, but he heard it said that the aforesaid Ysarn and certain men from Issel and Labécède wanted to bail out and free two heretics. This was 4 years ago or more.

He has never seen heretics otherwise except as prisoners, nor believed, nor adored, nor gave or sent [them anything], nor led, nor listened to their preaching. He abjured heresy and swore, etc. Witnesses: Esteve, archpriest of Laurac; Arnald, chaplain of Les Cassès; Peire Johan, chaplain of Villepinte; and brother Bernard, inquisitor. 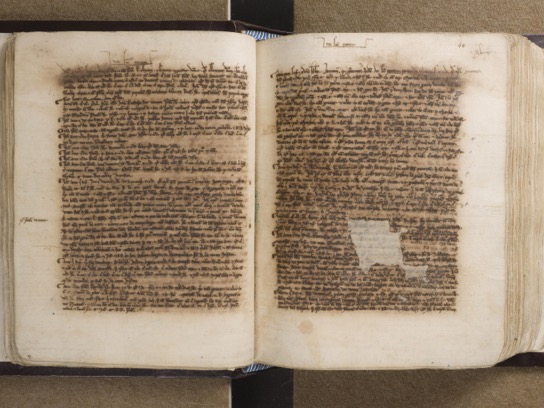