He is in prisonItem. Year and day as before. The sworn witness Arnald Andree said that he saw in the house of Ysarn de Gibel Bertrand Martini and his companion, heretics. He saw there with them W. de Leza, Peire Folcs, Pons Porquer, Guilhem Faure, Johan Cabrigas, Peire de Comas, and Peire Ghalhard, and Ysarn himself, dominum domus, and Andrea, wife of Ysarn. Everyone and the witness listened to the preaching of the aforesaid [heretics] and adored them. This was about 7 years ago.

Item. In the house of Guilhem de Saint-Nazare he saw the aforesaid Bertrand Martini and his companion, heretics. He saw there with them Guilhem de Saint-Nazare himself, dominum domus, Pons Mir, Johan de Vererilh, son of Johan de Vererilh, and Bernard Martin and Raimund, brothers, sons of Bernard Martin, and Bernard Martin himself, their father, and Sauram, wife of Bernard Guiraldi Dadalo, and Guilhelma, wife of Bernard Mir, dominas, and many others whom he did not recall. Everyone and the witness listened to the preaching of the aforesaid heretics and adored them there. This was the same period as above.

Item. In the house of Martin Traver he saw Guilhelma, wife of the late Raimund Faure de Campolongo, and two other companions of hers, heretics. He saw there with them Martin Traver and Guilhem Traver, brothers, and Bernarda, wife of Martin Traver. But he did not adore nor saw adoring. This was 10 years ago.

Item. He said that another day he went to the house of Pons Martin who was sick. He saw there Bernard Martin and Peire Amielh, and they told the witness to pay respects to the aforesaid infirm Pons as a heretic, as it had been 20 days since he was hereticated and received by the heretics. However the witness did not see [the heretication]. This was 7 years ago.

Item. Another time, in the house of Jordan Engale, he saw Guilhelma and her companion, heretics. He saw no one else there except Jordan Engale himself. He did not adore nor saw adoring. This was 11 years ago.

Item. in the home of Guilhem Faure the weaver he saw the aforesaid Raimund Jaules and his companion, heretics. He saw there with them Arnald Faure and Peire and Esteve, brothers, and Guilhem, also their brother who was sick at the time, and Martin de Vererilh and Raimund, brothers, and Bernard Hugo, Jordan Engale, Raimund Folquet, and Arnald Savauza. The witness and everyone listened to their preaching and adored them. And although Guilhem Faure was sick then, the witness did not know that he was hereticated by the aforesaid heretics. This was about 17 year ago.

Item. Another time Arnald Mazaler de Laurac and Arnald Dominic brought Arnald Prader and his companion, heretics, from the castrum of Laurac to Saint-Martin-Lalande. The witness, Peire Folcs, and Bernard Alzeu came out of the castrum to the said heretics and led them further to the waters of Fesquel. However, he did not adore them on greeting or leaving them, nor did he see adoring. This was about 3 years ago.

Item. He said that he believed the above-mentioned heretics to be good men, to be friends of God and true, to have good faith and that one could be saved through them, even though he knew that the Church persecuted them. He first believed the heretics 15 years ago and 3 years ago left [that belief]. Asked about errors, he said that he never heard them speak. Although he denied everything in his confession to brother Guilhem Arnald, he did confess everything about this to brother Ferrier at Limoux. 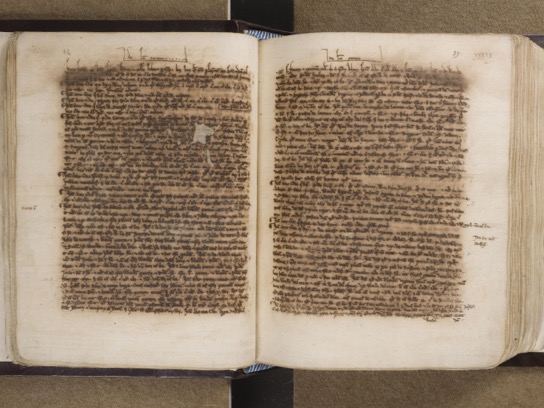