Item. Year and day as above. The sworn witness Peire Galhart said that at Saint-Martin-Lalande in the house of Ysarn de Gibel he saw two heretics whose names he did not know. He saw there with them [....] Ysarn and Andrea, wife of Ysarn. Everyone adored the heretics. This was about 4 years ago.

Item. He heard it said [....] of Saint-Martin-Lalande that on a certain day when he saw some women whose name he did not know carrying flour outside the village, there were some women carrying flour as well, who stayed in the woods of Saint Salvatore and who were heretics. The witness spoke then to a certain woman called Amada Gasquera, and this Arnalda Gasquera promised the witness 5 solidi. Later, it was Arnalda Gasquera, advised by the witness, who informed on their location and caused them to be captured.

Item. Another time, at Rieux-Minervois, where the witness was staying with Guilhem Saint-Nazare, who was baillus of that place, one day the aforesaid Guilhem Saint-Nazare enjoined the witness and Arnald Veil to leave the village and accompany two good men, that is, heretics. They did so. And in meeting them they adored them. Later P. de Vinhalet and Guilhem de Saint-Nazare came to them, seeing himself the adoration of the aforesaid heretics. Afterwards, everyone together entered the village and afterwards the witness did not see [them]. This will be 3 years ago next All Saints Day.

Item. He said that the above-mentioned Guilhem de Saint-Nazare sent the witness to Rieux-Minervois, where the aforesaid Wilhelm was baillus, to demand of the aforesaid P. de Vinhalet whether he confessed everything that he had done with respect to heresy with him, because he suggested setting forth everything completely. The aforesaid P. de Vinhalet responded to the witness that he confessed and that he did not tell the inquisitors what he had done with Guilhem Saint-Nazare with respect to heresy, nor would he confess even if they split his head all the way in two. The aforesaid Raimund asked Guilhem Saint-Nazare that he not tell anything about him whatsoever. This was a year ago. 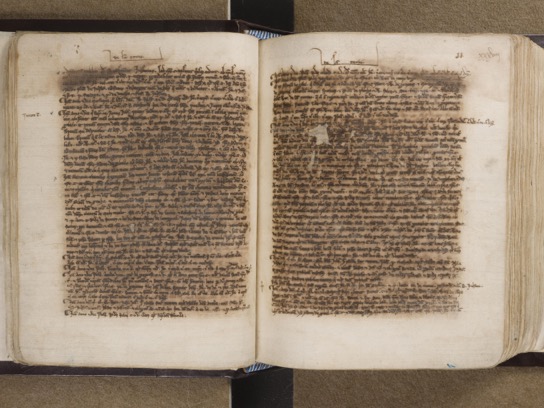