Item. Year and day as above. The sworn witness Melia, wife of Peire Johan, said that Ysarn de Gibel asked the witness to take in 4 pilgrims for the love of God and the love of Ysarn himself. She did so, and they came there for one night and for one day. However she did not know they were heretics until she heard it said that they were captured. She did not adore nor see adoring. This was about 6 years ago.

Item. She said that she saw in her own home Guilhelma de Campolongo and her companion, heretics, and she saw there with them Cerdana, wife of den Lalanda, and Aymersend, wife of Bernard Mir Arezat. At that time Cerdana and Aymersend adored the aforesaid heretics there, but the witness did not adore nor knew they were heretics until she saw the aforesaid dominas adore the said heretics. This was about 12 years ago.

Item. She saw two heretics she did not know in the house of Arnald Ysarn. She saw there with them Ysarn de Gibel who brought the heretics there, Arnald Ysarn, Guilhelma Ysarn, and Guilhelma's son P. Ysarn who was ill there. Then the witness heard it said that the aforesaid heretics hereticated the aforesaid ill P. Ysarn. But the witness was not present, nor adored nor saw adoring, nor gave or sent [them] anything, nor listened to their preaching. She hid the truth of the foregoing from brother Ferrier, but she told the truth to brother Guilhem Arnald. She abjured heresy and swore, etc. Witnesses: Arnald, prior of Saint-Sernin; R. Ferriol, chaplain of Saint-Julia; and brother Bernard, Inquisitor. 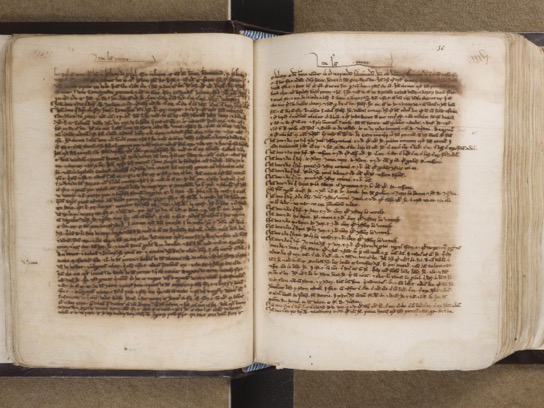