Item. Year and day as above. The sworn witness Guilhem Faure said that he saw Bertrand Marti and his companion, heretics, in the house of Ysarn de Gibel, and he saw there with them Ysarn de Gibel, Bernard Alzeu, Bernard Jordan, and Andrea, wife of said Ysarn de Gibel. The witness himself and everyone else listened to the aforesaid heretics there and adored them. This was about 11 years ago.

Item. He said that when the witness was sick with a grave illness Bernard Alzeu brought Raimund Jaules and his companion, heretics, to the home of the witness. The said heretics wanted to hereticate the witness, however he could not speak, nor recognize people, nor did he see the aforesaid heretics there. It was afterwards that he heard it said that heretics stayed in is house. This was about 3 years ago.

He believed the above-mentioned heretics to be good men and to have good faith even though he knew that the Church persecuted them. He heard them speak erros of visible things, that God did not create them, and that the holy host is not the body of Christ. But the witness himself did not believe the aforesaid errors. It was 7 years ago when he first believed the heretics to be good men and 3 years ago when he stopped believing them good. The foregoing was confessed to brother Ferrier at Limoux, but denied the foregoing to brother Guilhem Arnald, inquisitor at Castelnaudary.

Item. In the house of Raimund Joglar he saw Guilhelma de Campolongo and her companion, heretics, and he saw there with them Peire Arnald, Raimund de Planha, Bernard Acezat, illegitimate son of Bernard Mir Acezat, Raimund Joglar, son of the abovesaid Raimund, and the sister of said Raimund, Raimunda. Everyone and the witness adored the aforesaid heretics. This was 7 years ago. He abjured and swore, etc. Witnesses: as stated before. 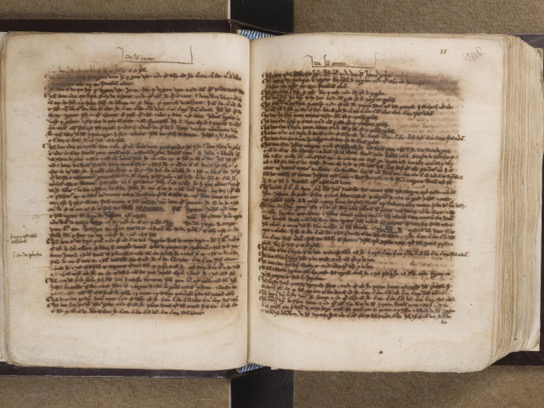