Find more of him in the 4th folio.Item. Year and day as above. The sworn witness Esteve Faure said that he saw Guilhem Arnald and Peire Arnald, heretics, in the house of Ysarn de Gibel and he saw there with them Guilhelma Forner and Arnald Forner, her son, Bonet, and Raimund Villard, Bernard Martin senior, and Peire Amielh, and Bernard Martin junior, and Andrea, wife of Ysarn de Gibel, and Ysarn himself. The witness and everyone else adored the aforesaid heretics there, bending three times at the knee, saying, "Bless us good men, pray to God for us." This was about 5 years ago.

Did not confess in the grace period.Item. He saw in the house of Guilhem Saint-Nazare Bertrand Martini and his companions, heretics, and he saw there with them Pons Mir, Guilhelma de Campolongo mother of Pons Mir, Raimunda, wife of Guilhem Saint-Nazare, and Sardana, wife of Raimund Pons, and Cerdana, wife of Mir de Lalanda, and Mir de Lalanda himself, Bernard Alzeu, Ysarn de Gibel, Peire Amielh, Esteve de Villèle, and Raimund Clavel. The witness and everyone else listened to the heretics' preaching there and adored them. This was about 6 years ago.

Item. He said that he saw in the house of Peire Amielh Raimund Adam and Peire Arnald, heretics, and he saw there with them Amielh himself, and Peirona Amielh, sister of the said Peire Amielh. The witness and everyone else adored the aforesaid heretics there. This was 8 years ago.

Item. He believed the above-mentioned heretics to be good men, to have good faith and that one could be saved by them, even though he knew that the Church persecuted them. But he did not hear them speak errors of visible things, that God did not make them. He did not hear them speak of the holy host, or of baptism, or of matrimony, nor of bodily resurrection; but he did hear his chaplain speak of the errors that heretics speak, but he did not believe the aforesaid errors. It was about 10 years ago when he first believed the heretics to be good men, but he stopped believing the year before, that is after he confessed to brother Ferrier, at Limoux. But he did not confess to brother Guilhem Arnald, nor had penance.

Item. He said as well that he went to Saint-Papoul Abbey with Ysarn de Gibel, Bernard Alzeu, Arnald Forner, Raimund Forner, and Peire Faure, brother of the witness, and Jordan Hugole, and many others up to 18, all bearing arms. But the witness himself did not go with them in order to save heretics. He abjured heresy and swore, etc. Witnesses: Arnald, prior of Saint-Sernin; Arnald Cerda; Peire Fresapa; and brother Bernard, inquisitor. 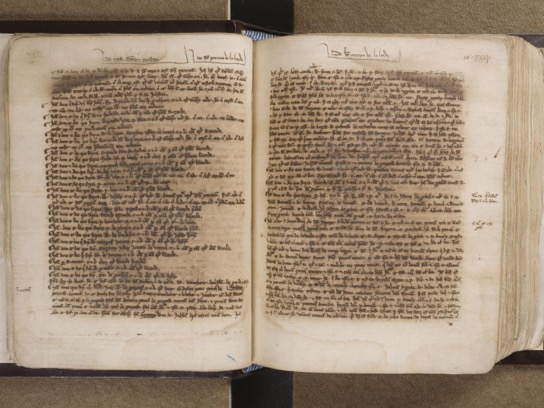