Year of our Lord 1245, 4th Kalends of June. The sworn witness Bernard Mir who is called Acezat, said that he saw heretics in public at the castrum Saint-Martin-Lalande in ten houses. He saw the majority of people of said castrum at the preaching of the aforesaid heretics. This was 30 years ago.

Item. He said that in the same period Bernarda Mironneta, sister of the witness, was a heretic for 7 years, and she died after conversion. He said as well that he ate many times with the aforesaid sister, heretic, and he was 20 years old at the time. He did not adore nor saw adoring.

Item. He saw Raimund Bernard and his companion, heretics, on a farm near Saint-Martin-Lalande, and he saw there with them Mir Bernard and Bernard Mir, son of Bernard Mir. The aforesaid heretics arranged some debt between the witness and the above-mentioned knights. He did not adore nor saw adoring. This was 20 years ago.

Item. He said that Guilhem P. lead the witness to a house at Montesquieu where heretics preached. He saw there the aforementioned Guilhem P. and many others he did not know. They listened a little to the aforesaid heretics. He did not adore nor saw adoring. This was 7 years ago.

Item. He said that Aymersend, wife of the witness, gave Bertrand Martini, heretic, a bowl full of chestnuts under the witnesses' name, although he was unaware of that. This was about 10 years ago. And the aforesaid heretic was in the house of Guilhem Saint-Nazare in Saint-Martin-Lalande.

Item. He said that the above was confessed to brother Guilhem Arnald at Laurac and brother Ferrier at Limoux. He said as well that he never believed the heretics to be good men nor did he hear them speak of baptism, nor matrimony, nor of the body of Christ, that it means nothing for salvation, nor that there was resurrection of the dead, nor did he believe the aforesaid errors, nor did he adore the heretics ever, nor did he listen to their preaching except as stated above. He abjured heresy and swore, etc. Witnesses: Arnald, prior of Saint-Sernin; Arnald Cerda; brother Guilhem Pelhisson of the order of preachers; and brother Bernard, inquisitor. 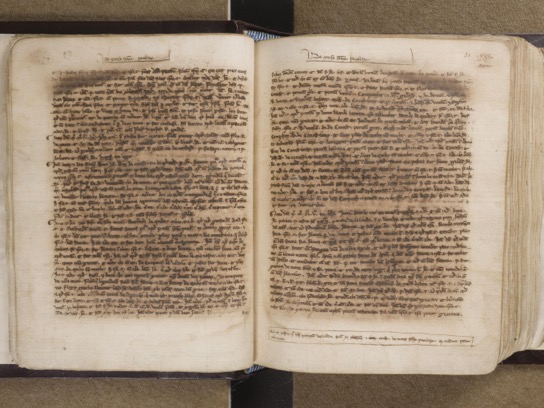