Year and day as stated before. The sworn witness Na Mateus, wife of the late Bernard Fabri de Castelho, said that she and her son Bernard Fabri received in her house at Mas-Saintes-Puelles Bernarda and Rixen, her companion, heretics, for one day and two nights at the request of Arnald Godalh and Peire Cap-de-Porc, who brought the heretics food. She saw there with them the aforesaid Arnald and Peire, and Bernard, sone of the witness. Everyone and herself adored the aforesaid heretics there, bending at the knee saying, "Bless us, Lord, pray to God for us." This was 6 years ago.

Item. She said that she saw in her house three heretics, namely Raimunda Bordes, converted from heresy, and companions, heretics. She saw there with them Bernard Garsias and Peire Lavanet of Laurac, and Arnald Godalh and his wife Guilhelma, and Bernard Fabri, son of the witness. Everyone including the witness adored the aforesaid heretics there and ate with them bread blessed by them. During that time Arnald Godalh and his wife Willelma many times, and Bernard Garsias and Peire Lavanet once, brought food to the aforesaid heretics. This was the same period.

Item. She saw in her house Donat Tersola and his companion, heretics, who stayed there for a day and night. She saw there with them Arnald Godalh and Jordanet del Mas, who brought the heretics there, and Bernard Faure, son of the witness. The witness adored the aforesaid heretics there. This was the same period.

She believed the above-mentioned heretics to be good men, true, friends of God, to have good faith and that one could be saved by them, even though she knew the Church persecuted them. She did not hear the heretics speak errors. It was 7 years ago that she first believed the heretics to be good but she did not keep that belief more than two years. This was confessed to brother Ferrier, and afterwards she did not see heretics. She abjured heresy and swore, etc. before the aforesaid inquisitors. Witness as before. 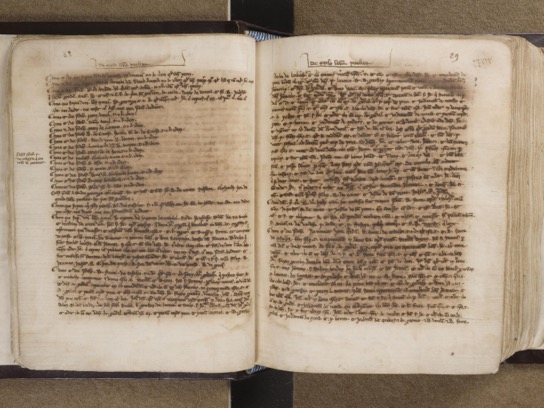