Item. Year as above, 5th Nones of July. The sworn witness Raimund Pinaut said that he saw in the house of Peire de Saint-Andrea at Mas-Saintes-Puelles Peire Guilhem and Donat and other heretics whose names he did not know and he saw there with them Raimund del Pont, Guirald de Vilar, Raimund Gauta del Puh, Guilhem Canast-Bru, and Peire de Saint-Andrea and Susanna, his wife. However, the witness himself did not adore them nor saw adoring. This was about 8 years ago.

Item. He said that he saw Peire Guilhem and his companion Donat, heretics, in the some casali of Guilhem Vidal at Mas-Saintes-Puelles, and he saw there with them Arnald Godalh, Peire de Saint-Andrea, Guilhem P. Barbas, son of Guilhem P. Barbas, and Raimund Amelh. However, the witness did not adore them nor saw adoring. Then the witness and Guilhem Barbas and Raimund Amelh led and accompanied the heretics to the tile workshop at Puybusque. The witness himself and all the aforesaid adored the heretics there in withdrawing. This was about 7 years ago.

Item. He said that he, Arnald Godalh, Peire Cap-de-Porc and Raimund del Pont led the above-mentioned heretics out of Peire Cap-de-Porc's house, and led and accompanied them to planam bandonem in the territory of Mas-Saintes-Puelles. There everyone except the witness adored the said heretics. This done, the witness then took the heretics and accompanied them to some hill above Agassens while everyone else returned to their homes. The witness himself adored the said heretics there. This was about 11 years ago. He added as well that the aforesaid heretics gave him 4 denari of Toulouse for accompanying them. He has not seen heretics otherwise except prisoners.

Item. He said that he believed heretics to be good men and to have good faith and to be true and friends of God, and that one could be saved by them. However, he did not hear the heretics speak about visible things nor of the sacraments of the Church. And it was [lacuna] years ago that he first believed heretics to be good, and he left that belief when he confessed to brother Ferrier at Saissac. Thereafter he did not see heretics. He abjured heresy and swore, etc. Witnesses: [lacuna] prior of Mas-Saintes-Puelles; Artaud, arch-priest of Lavaur; and brother Bernard, inquisitor. 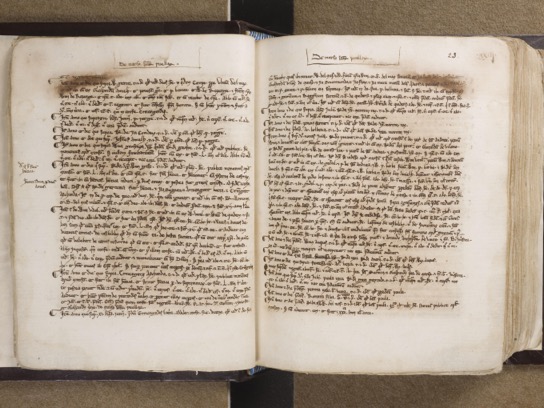