Let her be held in prisonItem. Year and day as above. The sworn witness Na Saramunda, wife of Bernard, knight and lord of Mas-Saintes-Puelles, said that during the war years, DongesAwaiting review returned to the witness a certain place called 'Cumiers'. The witness went to the said location and discovered in the witness' house Na Garsen del Mas and Galharda del Mas, heretics; Na Garsen was mother-in-law of the witness and Galharda was sister of the witness. She saw with them Pons Faure de Vilanova, knight. The witness did not adore nor saw adoring, but the said heretics slept there for one night and the witness was in her house with them. This was about 25 years ago.

Item. She said that her mother was made a heretic, but she did not see her while a heretic except one time. In this one time she saw her ill in the house of some poor women at Cumiers, and she saw there with her mother some other women heretics and and she spoke with them. She saw nobody else with them. And when she was in the aforesaid house, R. B. and their companion, heretics, came into the house, and they greeted each other. She did not adore them nor listened to their preaching. This was around the same time.

Item. She saw Guilabert de Castre and his companion, heretics, in the house of Raimund Canast where Na Estolt de Rochavila was staying, and she saw there with them Guilhem del Mas, and Na Estolt de Rochavila. The witness did not adore for saw adoring, but she said that Galharda, the above-mentioned heretic who was then living openly, invited Guilabert de Castre and his companion, heretics, and she lead them to Galharda's own house. This was about 30 years ago.

Item. She saw the aforesaid Guilabert de Castre and his companion, heretics, in the house of Arnald Canast, and she saw there with them Na Floriana, wife of del Mul de Mairevila, with whom the witness had gone there. She saw there Arnald Canast and Raimund, brothers. But the witness did not adore nor saw adoring, however she listened to their preaching. This was around the same time.

Item. She said that she did not believe the heretics to be good men nor true nor friends of God, nor did she hear them speak of visible things, nor of the Eucharist, nor of matrimony, nor of resurrection of the body. All the foregoing was confessed to inquisitors at Limoux, which confession she believed to be the truth. After that confession she did not see heretics that she recalled, nor believed, nor adored, nor gave or sent [them anything], nor led, nor listened to their preaching.

Item. She saw Bernard de Mairevilla and his companion, heretics, in the house of Guilhem Canast, and she was there with them her mother who said a false reconciliation (confession), and Guilhem Canast-Bru, and the mother of said Guilhem. And everyone and the witness adored the said heretics there, bending three times at the knee saying "Bless us." This was about 15 years ago.

Item. She saw Na Garsen del Mas, mother of the witness, and her companion, heretics, in the house which Jordan del Mas owns, but she did not adore them nor saw adoring. She abjured heresy and swore, etc. Witnesses: as in the confession of Bernarda, wife of P. dels Amanielhs. 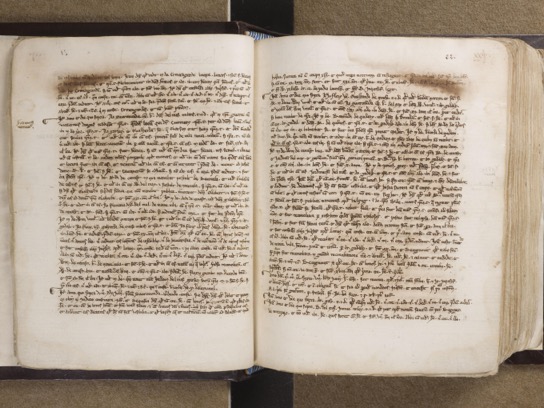