It is said that he lost his foot for the faithItem. Year and day as above. The sworn witness P. Bernard, butcher, said that he saw Raimund de Nariqua and his companion, heretics, in the house of Raimund's aforesaid mother Riqua, and he saw there with them Peire Gauta senior, and Guilhem Canast who is called lo Brus, and Guilhem de la Silva, and Riqua herself, and Arnald Maiestre, deceased. At this time the aforesaid heretics made peace between the witness and Arnald Maiestre. The witness and everyone else except Peire Gauta adored the aforesaid heretics there, bending at the knee three times saying, "Bless us, good men, pray to God for us." This was about 8 years ago.

Item. He saw Pons Bolvena and his companion, heretics, in the house of Peire Cap-de-Porc and saw there with them Guilhem de la Silva, and Peire himself, and the wife of Peire, and Peire's brother Bernard Cap-de-Porc, who afterwards became a heretic. The witness himself and everyone else adored the aforementioned heretics. This was about 8 years ago.

Item. He saw Bertrand Marti and his companion, heretics, in the house of Guilhem Canast-Bru, and he saw there with them Guilhem de la Silva, Raimund Amelh, Jordan de Quiders, Bernard de Mairevilla, heretic, and Andreas de la Font de Vilanova, and many others whom he did not recall. The witness himself and everyone else adored the heretics there. This was the same period.

He believed the aforesaid heretics to be good men and to have good faith and to be friends of God. But he did hear them speak errors of visible things, but not of the sacraments. All of the foregoing, and much more which he did not recall, was confessed to brother Ferrier at Limoux, and he believed that confession to be true. He recognized that he had done a wicked thing as after he abjured heresy and swore and promised to persecute heretics, he saaw, believed, and adored heretics. He abjured heresy and swore, etc. Witnesses: as stated before. 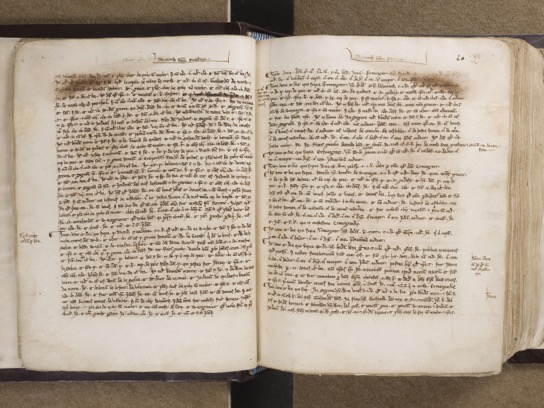