suspectItem. Year and day as above. The sworn witness Bernard Aichart said that he saw Bernard de Mairevilla and his companion, heretics, in the house of Guilhelma Companh at Mas-Saintes-Puelles, and he saw there Arnald Maiestre, who was then laid low with an illness from which he died and who was the concubine of the aforesaid Wilhelma Companh, and Bernard Cogota, Roger Sartre, Guilhem Pons de Recauth, and many others whom he did not recall. But he did not adore nor saw adoring, nor did he know if the aforesaid ill person was hereticated. This was about 20 years ago.

Item. He saw P. Fabri and his companion, heretics, in a certain place called Oliver outside the village of Mas-Saintes-Puelles, and he saw there with them Companh, Pons Gran, Paul Vidal, and Arnald Godalh. The witness himself and everyone else adored the aforesaid heretics there, bending at the knee three times saying, "Bless us, good men, pray to God for us." This was about 6 years ago.

Item. He saw Bertrand Marti and his companion, heretics, at La Capela near the village of Mas-Saintes-Puelles, and he was there with them Peire Gauta senior, Garnier, Raimund Gauta, Companh, and many others whom he did not recall. The witness himself adored the said heretics there but did not see others adore that he recalled. This was about 8 years ago.

Item. He saw the above-mentioned heretics in the house of Guilhem Vidal, and he saw there Guilhem Vitalis himself and his wife. The witness himself adored the heretics there but did not see the others adore. This was about 12 years ago.

Item. He said that Moreta asked the witness and Paul Vidal to accompany Arnald Prader and his companion, heretics, with him. The witness and Guilhem Vidal and the aforesaid Moreta accompanied the aforementioned heretics from Mas-Saintes-Puelles to a place called Pontilhol, but he did not adore nor saw adoring. This was about 8 years ago.

He believed the above-mentioned heretics to be good men and to have good faith and to be friends of God and true and one could be saved by them. He did not hear them speak the error that God did not create visible things, and he did not hear them speak about matrimony, baptism, nor of the holy host. He first believed the heretics to be good 16 years ago, but stopped believing after he made his confession to brother Ferrier at Limoux. He did not see heretics anywhere else, nor believed, nor gave or sent them anything, nor accepted anything from them that he recalled. All of the foregoing and much else besides that he did not recall was confessed to the inquisitor brother Ferrier, and all of which he believed to be the truth. He recognized that he had done a wicked thing as after he abjured heresy and promised and swore to persecute heretics, he saw, adored, and believed heretics. He abjured heresy and swore, etc. Witnesses: as stated before. 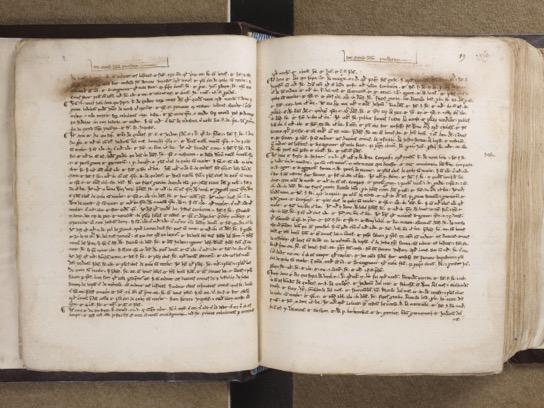