Item. Year and day as above. The sworn witness Jordan de Quiders, domicellus, said that he saw Guilabert de Castre and Bertrand Marti at Montségur, and he saw there with them P. Vidal, servientem of Peire Roger. The witness and aforesaid P. Vidal adored the aforesaid heretics there, bending three times at the knee saying, "Bless us, good men, pray to God for us." This was about 8 years ago.

Item. He saw Bernard de Mairevilla and his companion, heretics, in the vineyards of Guilhem Vidal or Peire Vidal, and he saw there with them Arnald Godalh, Galhard del Mas, Bernard Aichart, and Pons Adamar. The witness and everyone else adored the aforesaid heretics there. This was about 6 years ago.

Item. He said that he saw Arnald Prader and his companion, heretics, in his own home. They were brought there by Jordan del Mas and Arnald Godalh, the witness himself not knowing, and they stayed there that night. And the witness adored them. The next day they ate at the home of Raimund de Quiders, brother of the witness and he saw with them Raimund de Quiders, Guilhelma Meta, mother of the witness, and Arnald Godalh. But he did not adore nor saw adoring. He did not recall when this was. But in another confession the period was written down.

Item. He saw Guilhem Vidal and his companion, heretics, in the house of Pons Gran, and he saw there Jordan del Mas, uncle of the witness, Pons dels Amanielhs, Pons Barrau, and Pons Gran. The witness adored the aforesaid heretics there, but he did not see others adore. This was about 7 years ago.

Item. He saw the abovementioned heretics in some place called Lo Radel, and saw there with them Galhard Amelh, Arnald Godalh, Companh, Pons Rainart, Guilhem de Rosengue, Pons Garnier, and Arnald Lapassa who is called Nadal, and many others whom he did not recall. The witness and everyone there adored the aforesaid heretics. This was about 7 years ago.

Item. He said that he, Jordanet del Mas, Pons Barrau and Arnald Godalh brought Arnald Prader and his companion, heretics, from the home of Bernard Fabri de Castilho to the house of Guilhem Vidal, but he did not adore nor saw adoring. This was about 6 years ago.

He believed the aforementioned heretics to be good men and to have good faith and friends of God and one could be saved by them, even though he knew that the Church persecuted them. But he did not hear them speak errors of the visible things, that God did not make it, he did not hear them speak of baptism, of matrimony or of the holy host. He first believed the heretics to be good 14 years ago, and stopped believing 4 years ago. All the aforesaid was confessed to brother Ferrier at Limoux, among many other things which he did not recall, but all he believed to be true. He abjured heresy and swore, etc. Witnesses: as stated before. 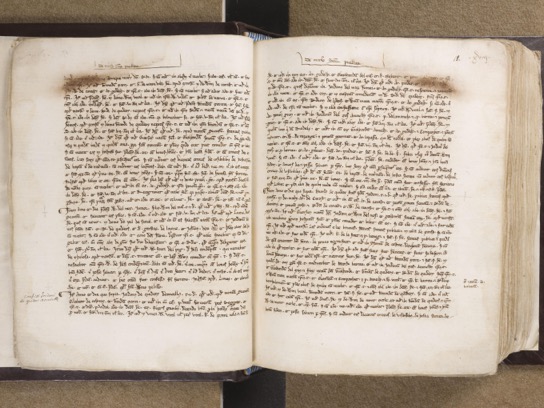