He and his wife Saramunda are worse than everyone else at Mas-Saintes-Puelles, it is said.Item. Year and date as above. The sworn witness Bernard del Mas, brother of the aforesaid Aribert, said that he saw two heretics, whose names he did not know, in his and his brother's house hereticating Fabrissa, the wife of his brother Guilhem del Mas. Attending the aforesaid heretication were Jordan del Mas, brother of the witness, and Aribert, and Arnald Canast, and [Raimund de] Causit, and many others whom he did not recall. The aforesaid heretics brought said Fabrissa that same night to the house Garsen, mother of the witnesses, and Galharda, sister of the witness, heretics. The aforesaid Fabrissa stayed with the said heretics for two months. Then the witness and the aforesaid Fabrissa's father Vaccari removed her from the home of aforementioned heretics and they reconciled her away from heresy and returned her to the home of Guilhem del Mas, her husband. But he did not adore nor see others adore. This was about 35 years ago.

Item. He said that he saw Guilabert de Castre and his companion, heretics, in the house of Estolt de Rochavila at Mas-Saintes-Puelles, and he saw there with them Estolt himself and Estolt's brother Beguon de Rochavila, and Guilhem del Mas, the witness' brother, and Arnald de Canast. The witness himself and everyone else adored the aforesaid heretics there, bending three times at the knee, saying, "Bless us, good men, pray to God for us." And they listened to their preaching. This was about 20 years ago.

Item. He said that Galharda, his sister, heretic, invited the aformentioned Guilabert there and ate with him in the same house where the witness was staying, but there was a wall separating them. He did not adore nor saw adoring. This was the same period as above.

Item. He said that he saw Johan de Sainte-Foy and his companion, heretics, in the house of Peire Cap-de-Porc at Mas-Saintes-Puelles, and said heretics then asked the witness to make peace with said Cap-de-Porc, with whom he had fallen out with at the time, and he did so. The aforesaid heretics preached there. He saw at the sermon Guilhem del Mas and Jordan, brothers of the witness, and Garnier of Mas-Saintes-Puelles, Jordan, Peire Gauta, Guilhem Vidal, and many others up to around 40 people, but he did not recall the names of everyone. He withdrew from there and left them, and did not adore nor saw adoring. This was about 15 years ago.

Item. He said that he never saw any man or woman being hereticated, nor saw Guilhem Garnier junior with heretics in his own home.

Item. He said that he saw B. de la Font and his companion, heretics, in the house of Arnald Canast at Mas-Saintes-Puelles and they were living openly at that same house. He saw there with them Peire Gauta senior and Arnald Canast himself, and Garnier, and many others whom he did not recall. But he did not adore nor saw adoring. This was 25 years ago.

Item. He saw in the house of Guilhem Vidal at Mas-Saintes-Puelles two heretics whose names he did not know or forgot, and he saw with them Guilhem Vidal himself and Arnald Canast and many others he did not recall. But he did not adore them nor saw adoring. This was the same period.

Item. He said that he and his brothers Guilhem del Mas and Guilhem Palazis, prior of Mas-Saintes-Puelles, attempted to draw his mother and his sister away from heresy, giving them meat for food, but afterwards they returned to heresy again and were burned. He did not see heretics anywhere else, nor believed, nor adored, nor gave or sent them anything. The all of this was confessed to brother Ferrier at Limoux.

Afterwards he said that he saw Alaisa de Cuguro, heretic, many times in his home, but he did not adore nor saw adoring. Afterwards she made confession and ate meat and took communion. This was 10 to 12 years ago. 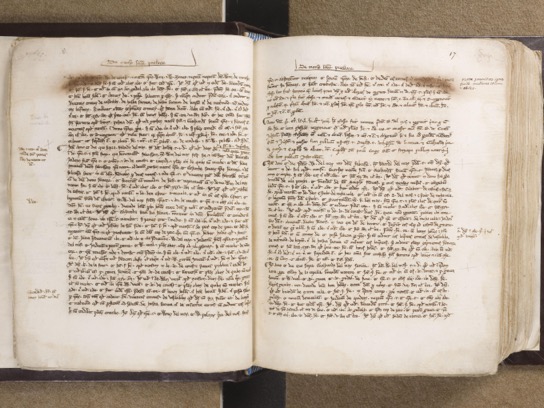