Item. Year and date as stated before. The sworn witness Aribert, lord of Mas-Saintes-Puelles, knight, said that he saw many heretics many times at Montségur, but he never adored them there nor saw adoring. This was 20 years ago.

Item. He said that he saw his mother Garsen and his sister Galharda, heretics, at Montségur, but he did not adore them nor saw adoring. This was in the same period.

Item. He said that he saw Bernard de Mairevilla and his companion, heretics, in the house of Guilhem Vidal at Mas-Saintes-Puelles, and he saw there the witness' brother Jordan, and Arnald Godalh and Guilhem Vidal himself with his wife. The witness and Arnald Godalh adored the aforesaid heretics there, bending at the knee three times saying, "Bless us, good men, pray to God for us." But he did not recall seeing the others adore. This was about 6 years ago.

Item. He said that he saw in the same house Bertrand Marti and his companion, heretics, and he saw there with them Arnald Godalh. They adored the aforesaid heretics there. This was about 10 years ago.

He believed the aforementioned heretics to be good men and to have good faith and to be friends of God, and that one could be saved by them. But he never listened to their preaching, nor heard them speak errors of visible things, of the holy host, of baptism, nor did he hear them speak of matrimony. But he did hear clerics speak the errors which heretics say. He did not see heretics anywhere else, nor heard nor gave or sent them anything. It was 25 year ago that he first believed the good men, and he ceased believing 6 years ago. All of this was confessed to brother Ferrier at Limoux.

Afterwards, he said that he saw his mother Garsen and his sister Galharda, heretics, living in their own house at Mas-Saintes-Puelles. He did not adore nor see adoring, but he did eat with them many times. This was about 25 years ago. 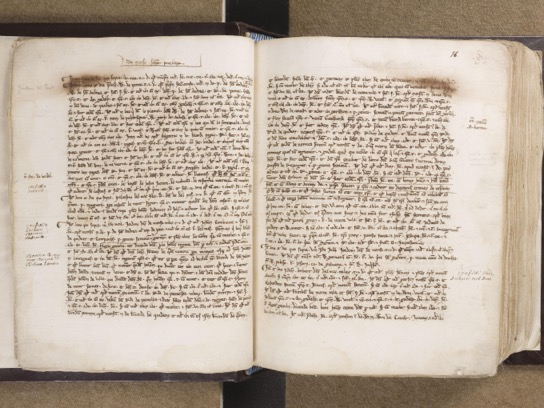