Item. Year as above, 2nd Ides of June. The sworn witness Pons Garnier said that he saw heretics in the house of Guilhem Canast-Bru at Mas-Saintes-Puelles and he saw there with them Peire Gauta, Garnier father of the witness, Jordan del Mas, Guilhem Canast-Bru, Flor wife of Galhard del Mas, Raimunda wife of Bernard Barrau, and everyone except the witness adored them there. This was 10 years ago. And then the witness and everyone else retired but the aforesaid heretics remained there.

Item. The witness saw Bernard de Sancto Andrea and his companion, heretics, at Lo Radel and he saw there with them Guilhem de Rosengue, Pons de Rosengue, Jordan de Quiders, Pons Gauta, Guilhem German, Arnald Godalh, P. Barrau, Guilhem Ayner, and others whom he did not recall. Everyone and the witness adored the heretics there. This was 8 years ago.

The witness did not see heretics anywhere else, nor believed, nor adored, nor gave, nor sent them anything, nor led. The witness believed the aforesaid heretics to be good men and to have good faith, and it was 8 years ago that he first believed them to be good and in the same year left the errors. The witness abjured heresy and swore, etc. Witnesses: Arnald, prior of Saint-Sernin; magister Peire de Caramanh; and brother Bernard de Caux, inquisitor. 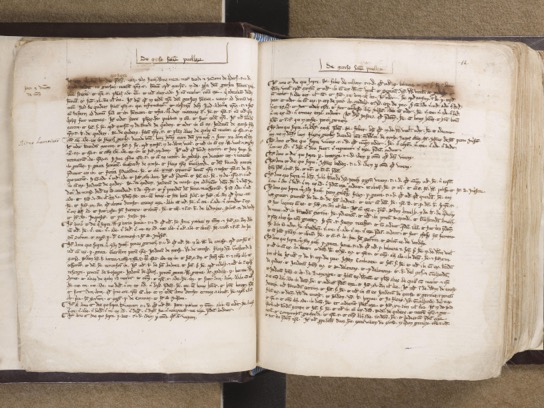