Item. In the name of our crucified lord Jesus Christ. Amen. Year of our Lord 1248, 5th Kalends of June. We, brothers of the Order of Preachers Bernard de Caux and Johan de Saint-Peire, et cetera.de Sancto Felice

As Guilhem de Valeira of Saint-Felix, diocese of Toulouse, condemned for heresy, saw heretics on many occasions and in many places, visited them, received them many times in his home, gave them food, ate with them at the same table, accompanied them many times, brought them to hereticate certain people, attended the heretication of certain people, paid the bequest of heretics, attended apparelhamen of heretics, accepted the peace from them, listened to their preaching, adored them with bended knee three times, prostrated with hands on the ground so many times it cannot be remembered, believed heretics and their errors, and believed he would be saved if he died in their sect, and after adbjuring heresy before other inquisitors at Saint-Felix and again at Toulouse in trial, he saw and adored heretics many times and relapsed in the abjured heresy; as well after receiving a record from inquisitors and presented defence, he saw, believed, received, and adored heretics in his home at Valeira, and gave them food, and, cornered, interrogated, still denied the aforesaid at judicial trial against his own conscience and sworn oath, although it was established before us in judicial confession;

He now, following wiser council, wishes to return to the unity of the Church as he claims, first having abjured heretical depravity; we therefore release him - following the ways of the Church - of the chains of excommunication by which he was bound due to the aforesaid crimes, so long as he has returned to ecclesiastical unity in good faith and having fulfilled the commands enjoined upon him; as he rashly transgressed God and the Holy Church in the aforementioned ways, he appears before us today as compelled, legally summoned, to receive his penance, definitively assigned, regarding the crime of heresy: we, after discussion with many prelates and the council of many other good men, order and desire that he be put in prison indefinitely, and we enjoin on him this penance bound by his sworn oath. If, indeed, he refuses to carry out the aforesaid penance, we again bind him by the chains of excommunication.

Enacted at Toulouse in the cloisters of Saint-Sernin in the presence of Arnald, prior of Saint-Sernin; Raimund, chaplain of Sainte-Marie-la-Daurade; magister Peire, archpresbyter of Caraman; Johan de Saint-Gaudens; Peire Aribert; and many others. 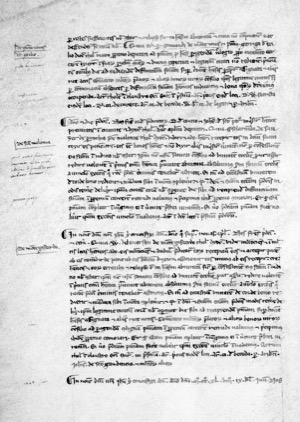