Item. In the name of our crucified Lord Jesus Christ. Amen. Year as above, 6th Ides of September. We, brothers of the Order of Preachers Bernard de Caux and Johan de Saint-Pierre, inquisitors of heretical depravity appointed by apostolic authority in the city and diocese of Toulouse:

As Guilhem de Saint-Nazare of Saint-Martin-Lalande and Raimund Saumatier of Laurac, diocese of Toulouse, caught in heresy by their own confessions which renders them culpable for perpetual imprisonment and more besides, obliged by their own sworn oath to render themselves in person for sentencing, but not willing, we, after discussion with many prelates and the counsel of other good men, by definitive sentence, condemn them, legally summoned but contumaciously absent, as heretics, order their goods be seized, and excommunicate them and anyone who knowingly hereafter give them counsel, help, or favour. 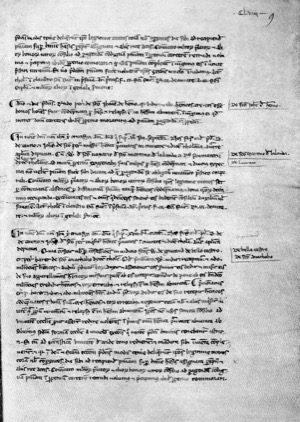