Item. In the name of our crucified Lord Jesus Christ. Amen. Year of our Lord 1247, 15th Kalends of September. We, brothers of the Order of Preachers Bernard de Caux and Johan de Saint-Pierre, inquisitors of heretical depravity appointed by apostolic authority in the city and diocese of Toulouse:

As Laurac Bereilles Gauré Roumens Peire Benedict of Laurac, Peire Babali of Bereilles, Guilhem Esteve of Gauré, and Pons de Na Pagesa of Roumens, of the diocese of Toulouse, by their own judicial confessions caught in manifest heresy, and for this obligated to do penance and condemned to prison indefinitely. As they are not willing to appear, as obliged by their sworn oath, in person regarding penances, for judgement and sentence by the Church, and other rites besides, this very day regarding the crimes herein recounted, to hear the sentence regarding the crime of heresy, definitively handed down, after discussion and council with other good men, those legally cited but contumaciously absent, by definitive sentence we condemn them as heretics, order their goods seized, and excommunicate them and all who knowingly hereafter give them counsel, help or favour. Witnesses as above in another sentence. 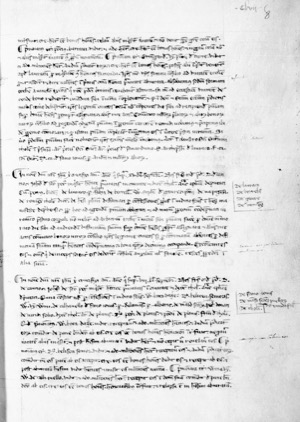