In the name of our crucified Lord Jesus Christ. Amen. Year of our Lord 1244, 7th Kalends. We, brothers of the Order of Preachers Bernard de Caux and Johan de Saint-Pierre, inquisitors of heretical depravity appointed by apostolic authority in the diocese of Agen and Cahors, and the office of the archdeacon in Villemur and Villalongue in the diocese of Toulouse:

As it has been established before us through the judicial confession of Aymeric de Bressols of Castelsarrasin, he adored heretics, listened to their preaching, believed their errors, that all, sworn and repeatedly asked, he denied before us; after examination before us, judicially established, he recognized to be true.

Now, indeed, following wiser council to return to the unity of the Church as he claims, willingly with good heart and faith unfeigned, first having abjured heretical depravity, we therefore release him - following the ways of the Church - of the chains of excommunication by whichhe was bound due to the aforesaid crimes, so long as they have returned to ecclesiastical unity in good faith and having fulfilled the commands enjoined upon them. As he rashly sinned against God and the Holy Church in the aforementioned ways, he appears before us today as compelled, legally cited, to receive his penance regarding the crime of heresy: definitively assigned, after discussion and council with many other good men, we order and desire that he be put in prison indefinitely, and that he swear to obey our commands going forward, we enjoin him with this penance bound by his oath. If, indeed, he refuses to fulfill the aforesaid penance, we again bind him by the chains of excommunication, and all those who receive from, and give him, counsel, help or favour.

Enacted at Toulouse in the church of Saint-Etienne in the presence of G. de Gordo, prior; Fortanier, archdeacon of Cornes; Hoctore, sacristan; R. Arcambal, Bencher Johan, B. Fabre, and B. de Lucs, consuls; W. Austorg, baliff, W. de Sart, Bertrand de Lart, burgers of Cahors; W. de Concourz; R., prior of Castelsarrasin; Bernard de Ladhinac; and many others. 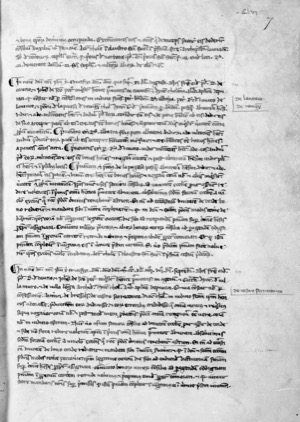